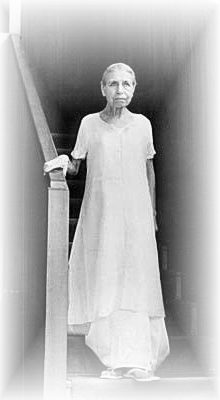 The Mother is the Divine Consciousness-Force that makes Him manifested. It is She who forms all worlds and beings and things and souls for the Divine Inhabitant. She is the Divine Will that  is one with Divine Truth.

Also She accepts human statue to do Her work in human form, "to make dumb Matter conscious of its God":

One had returned from the transcendent planes

And bore anew the load of mortal breath,

Who had striven of old with our darkness and our pain;

Survivor of death and the aeonic years,

Once more with her fathomless heart she fronted Time.

"The Mother not only governs all from above but she descends into this lesser triple universe. Impersonally, all things here, even the movements of the Ignorance, are herself in veiled power and her creations in diminished substance, her Nature-body and Nature-force, and they exist because, moved by the mysterious fiat of the Supreme to work out something that was there in the possibilities of the Infinite, she has consented to the great sacrifice and has put on like a mask the soul and forms of the Ignorance. But personally too she has stooped to descend here into the Darkness that she may lead it to the Light, into the Falsehood and Error that she may convert it to Truth, into this Death that she may turn it to godlike Life, into this world-pain and its obstinate sorrow and suffering that she may end it in the transforming ecstasy of her sublime Ananda. In her deep and great love for her children she has consented to put on herself the cloak of this obscurity, condescended to bear the attacks and torturing influences of the powers of the Darkness and the Falsehood, borne to pass through the portals of the birth that is a death, taken upon herself the pangs and sorrows and sufferings of the creation, since it seemed that thus alone could it be lifted to the Light and Joy and Truth and eternal Life. This is the great sacrifice called sometimes the sacrifice of the Purusha, but much more deeply the holocaust of the Prakriti, the sacrifice of the Divine Mother."

"The Mother's Force is not only above on the summit of the being. It is there with you and near you, ready to act whenever your nature will allow it. It is so with everybody here."

"You have only to aspire, to keep yourself open to the Mother, to reject all that is contrary to her will and to let her work in you – doing also all your work for her and in the faith that it is through her force that you can do it. If you remain open in this way, the knowledge and realisation will come to you in due course."

"The Mother's presence is always there; but if you decide to act on your own – your own idea, your own notion of things, your own will and demand upon things, then it is quite likely that her presence will get veiled; it is not she who withdraws from you, but you who draw back from her."

"Whether one feels the Mother's love or not depends on whether one is open to it or not. It does not depend on physical nearness. Openness means the removal of all that makes one unconscious of the inner relation – nothing can make one more unconscious than the idea that it must be measured only by some outward manifestation instead of being felt within the being; it makes one blind or insensitive to the outer manifestations that are there. Whether one is physically far or near makes no difference. One can feel it, being physically far or seeing her little. One can fail to feel it when it is there even if one is physically near or often in her physical presence."